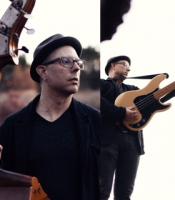 I play music with the hope that it will bring some joy to all of our lives, which in turn, will make the world a groovier place in which to live.  I also teach music because after all, we need to keep Nashville “Music City U.S.A.”

Originally from Denver, Colorado, I began playing bass while living in Japan in the 1990s. After a life-changing evening watching Japanese bassist Takashi Oyamada perform, I decided to concentrate on music. I returned to the States, majored in Music Performance for Bass at the University Of Northern Colorado at Greeley and began freelancing with various Colorado artists/bands such as Nina Storey, Joe Bonner, and Lannie Garrett.
In 2007, I finally made the move to Nashville and have been living here since. I split my time between touring, playing local shows, session work, and teaching. I have performed/recorded with a wide range of artists and bands in the area and currently play full time with Country artist David Ball and Bluegrass band the Tennessee Warblers.
www.deanmarold.com
www.davidball.com
www.tnwarblers.com