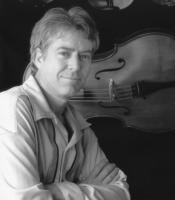 I am hired as an arranger (primarily for stringed instrument ensembles) - and I perform and record  the arrangements with violins, violas and cellos alone in my studio for a diverse clientele. I also play fiddle and other stringed instruments including ethnic varieties.

After his formal training, he began a career as a touring musician for various artists in several genres including outlandish entertainers Joe Savage and Jason D. Williams (RCA).

After moving to Nashville, Tennessee in the late 1980s, his group Fifteen Strings - a hard rock band - landed a major record deal with Atlantic Records in New York. A few years later, he signed as a staff writer for Warner/Chappell in New York, but remained a Nashville resident.

In the early 1990s, Chris transitioned in to full time studio work and arranging. His orchestral arrangements have been performed by major groups such as the Boston Pops Orchestra.

Arrangements of distinction include the string quartet arrangement of Tim McGraw's "If You're Reading This" which originally aired at the 2007 Academy of Country Music awards show, and later became a single release.

His contributions to film soundtracks include Down in the Valley, The Sapphires, and Shrek 2.