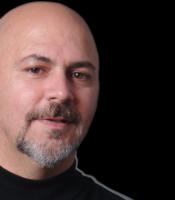 I love to enhance and compliment all types of music with drums and percussion from around the world, with groove, sensitivity and dynamics.

Visit www.johnarrucci.com to read what clients and colleagues say about my contributions and to hear examples. I also compose, arrange and lead my own ensemble.

John Arrucci is an acclaimed master artist. He has composed, performed and instructed for over 40 years.  He has studied on three continents, written for all mediums, and received numerous honors. His intimate knowledge of Classical, Jazz, North Indian, Afro-Cuban, Afro-Brazilian and other indigenous traditions gives him–and his audiences–a singularly rich perspective on the creation and impact of music.

As Composer, John has received numerous commissions, grants and awards for his performance and film music including commissions from members of The New York Philharmonic, The Manhattan Marimba Quartet, The Mannes College of Music and many others for solo, chamber music and large scale works for Wind Ensemble. He has received grants or awards from Meet the Composer, New York State Council on the Arts, John Lennon Songwriting Contest and numerous film festivals. His acclaimed 2011 release “Metaphors” features 9 of his compositions and performances on Drum Set, Vibes, Marimba and Percussion.

He graduated with distinction from Eastman School of Music. The Smithsonian Institution awarded him a Post-Doctoral level research fellowship to study Tabla in Benares, India with Pandit Sharda Sahai. This was followed by a Rotary Foundation Ambassadorial Scholarship to study music in Brazil, where according to the Tribune of Bahia he “inﬂuenced the explosion of Bahian music”. He also studied Shekere and Agbe with the renowned Chief James Hawthorne Bey, Conga and Afro-Cuban drumming with one its leading exponents Frank Malabe and Tabla with Robert Becker.

John has recently made Nashville, Tennessee his home base.  He is available for in-studio and remote recording, live performances, touring, commissions and Master Classes.