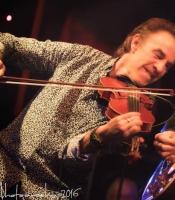 I am a seasoned Utility player with good harmony vocals and decent lead vocals. I am unique in that I play both strings and Woodwinds. My two primary instruments are Tenor Sax and Fiddle/violin. I am also very proficient on 5 string Banjo,  Mandolin and Rhythm Guitar. Pro player totally focused on music and the gig at hand. Play country, bluegrass, blues, Jazz, R&B/Soul.

Multi-Instrumentalist John Donahoe covers music from the hills of Kentucky to the streets of New York City on Tenor Sax, Fiddle/ Violin, Guitar, Mandolin and Banjo. John also supplies lead and back up harmony vocals. Born in Sioux Falls, South Dakota John originally pursued Architecture as a profession and became a registered architect. As years went by it became clear that music was his true passion. John has performed with numerous bands through the years including the innovative South Dakota bluegrass/newgrass group "The Rocky Mountain Oysters" with whom he recorded three albums and performed twice on Garrison Keillor's Prairie Home Companion show and also performed at the 1983 Worlds Fair in Knoxville Tennessee.

In the mid eighties John moved to Boston where he studied jazz and earned his degree in performance and professional music at the Berklee College of Music. John then spent eight years in the ground breaking, four time Boston music award winners, the "Boogaloo Swamis" performing on saxophone and fiddle in the cajun, Zydeco and blues styles of Louisiana.

From 2001 until his recent move to Nashville in 2014, John has been a regular member of the Bruce Marshall Group (Marshall Tucker Band) which had the honor in 2008 of representing Boston in the International Blues Challenge band category in Memphis, Tennessee. As luck woud have it, John won again in 2009 in the Blues Duo category and travelled to Memphis to compete again along with songwriter, vocalist and blues guitar great Steve Bailey. Over the years John has performed on stage with many notable artists including Bill Monroe, Jonathan Edwards, Mickey Gilley, Shawn Colvin, Leon Russell, Buckwheat Zydeco, James Montgomery, BB King and many others. Most recently John has been moving in a new direction and can be found performing as a freelance musician in a wide variety of styles including Jazz, Blues, Country, Americana and Bluegrass at numerous Tennessee & New England venues.