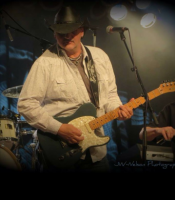 Lee Bogan is a South Carolina native, that moved to Nashville Tennessee in 1981 to hone his craft in songwriting. Bogan rose to prominence in 1993 with a top 5 hit, co written with Country artist Joe Diffie, titled "Honky Tonk Attitude".  As a BMI award winning song writer, Bogan has a catalog of songs stretching from his early years to present.  He went on to score six album cuts with Diffie including two "NASCAR"projects. Bogan has also produced several artists such as Bill Medley of Righteous Brothers, as well as a one song project featuring the Oak Ridge Boys, Billy Joe Royal, BJ Thomas, and many others. Lee Bogan resides in Portland Tennessee where he continues to record demos for songwriters at Skidrow Studio.

Lee has played guitar and sang background vocals for many artist including Joe Diffie, Dr Hook, Aaron Tippin and many others including singing on their albums. He's toured every state including Europe and Australia. Bogan is as professional as they come as a musician and songwriter.