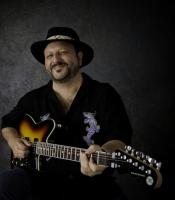 I’ve been playing guitar for 44 years. Music has always been my passion, and the guitar is where I can really express myself. I was not a singer, a writer, or a front man. I stood to the side and played guitar –often like a man possessed. People noticed my playing early in my career and I have been able to work with some amazing artists and musicians over the years; (list some here)

In 2004 I quit my job and moved to Nashville, TN. to play guitar. Every great guitar player seems to live in Nashville, so there is a little bit of competition. Somewhere along the way I started to write songs with some great songwriters and artists I was playing gigs with, and I got talked into singing some of those songs at songwriter’s rounds. But I’m a guitar player who plays in bands – that’s what I do. So in 2010 I decided to record some of my songs with a great group of players, and then go out and play those songs for people. Man- what an adventure! I’ve played thousands of gigs in my life- but fronting a band of Nashville players is one of the coolest things I’ve ever done. I started going out with the band in 2011 and we are still doing it.

I’ve been called a blues guitarist and artist, because that is where I have had the most notoriety throughout my career. But in my years of playing, I have done everything; rock, pop, folk, Americana and country – Blues is just one of the cards in my deck. So the band has evolved. We love to jam and take off on musical excursions through songs and chord progressions. There’s jazz and R&B in there, and some Allman Brothers inspired jam band stuff too. And we rock pretty hard. So we are a blues-based roots rock band that has some jam band in our DNA. Not very classifiable. So how about this? The Mark Robinson Band is a Roots Rock band. Playing with Daniel Seymour and Rick Schell solidified the way we approach playing as a band, and it seems to be working well.

My goal is to keep playing for audiences and keep growing as a musician and as an artist, and keep writing and recording new songs. I hope people keep listening, keep showing up at gigs and enjoy the music. Thanks to everybody who ever came to a show or bought a CD or download. We’ll see you – in a club or concert, or on the internet.