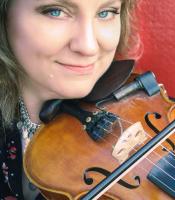 Star of the County Down.mp3

Singing "When You Say Nothing At All"
"Callin' Baton Rouge" with Made In Nashville Band
Dave Alexander and His Legends of Western Swing Band: Western Boogie
Jimmy Parker - Take Me Back
America’s Deadliest Storm by Ken Mandel Documentary: Violin background music
Too Early with Robin James
More Recording Sessions
Fiddle and Voice Improv

Currently, I play regularly 5 days a week on Broadway in Nashville as well as in sessions, private shows and parties. I am exploring other resources for live musical performance environments to be able to provide concerts and shows for public and private functions and online. I continue fostering relationships with many people in the music industry to further my career and keep playing music.

Merna Lewis is a Colorado native and began playing the fiddle at the age of 7, and now stands on the winged shoulders of her late Aunt Bettie Freel, well-known musician and music teacher in the San Luis Valley; and deceased Grandmother Marie Bond Riggenbach, violin virtuoso, The Juilliard School of Music graduate and teacher of violins at the Brearley School for Girls in New York City, and founder of Riggenbach School of Music in Alamosa, CO. Aunt Bettie taught Merna at the age of 14 to play with her country bands. When she passed away from cancer, she stepped in her shoes and continued the legacy.

Merna attended South Plains College in Levelland, TX to further her education and received an Associate of Applied Arts Degree in Commercial Music, where she focused on country, bluegrass, western swing and jazz genres. She played with several local bands throughout Texas and Oklahoma through college and after. Merna moved to Fort Worth and was hired to play with Dave Alexander (and his Legends of Western Swing Band), Dan Roberts (singer, songwriter) and others.  In 2003, she moved to Nashville to further pursue her music career and was hired immediately by several bands on the lower Broadway honky tonk strip. She also briefly toured with Tanya Tucker, Trent Willmon, Billy Arnold, The Roys, Chelsea Lena, and several others. She toured with Wild Gypsy with the USO and AAFES to play for the troops in many countries. She has recorded fiddle and vocals on many independent label artists and groups EPs and recordings. Recently, she's recorded with Sarah Lawton, Frank Foster, Jim Brown, Sarah Martin and others. For more extensive discography and career history, visit her website www.thebarefootfiddler.com.