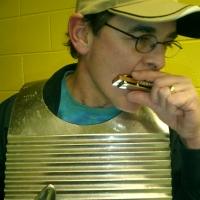 Shannon Williford is an educator/musician with a history of performance throughout his adult life. He has performed in theater and music for young people since he was a teen.
Williford is currently a music teacher for Metro Parks in Nashville, as well as doing other part-time music teaching in Metro Schools. He lives in Nashville with his wife, Anne, a Vanderbilt Family Nurse Practitioner, and daughters Linden and Julia Bee.
A longtime columnist for Nashville Music Guide and Bluesletter, the publication of the Music City Blues Society; Shannon is also a regular contributing writer to Blues Access Magazine and a free-lance writer for other publications.
As “Shan de Bayou,” Williford writes and performs regularly in a children’s theater series called Bayou & Patio’s Swamp Stories and Songs. Shan de Bayou is also the leader of a popular Bluesiana band called Delicious Blues Stew, which performs around the Southeast. The Stew was a finalist in the International Blues Foundation’s Best Unsigned Blues Talent contest in 1997. Williford also works around the Southeast doing Blues in the Schools educational performances, for which he was awarded the International Blues Foundation’s “Keep the Blues Alive” Award in Education for the year 2000. He has twice won the “Music City Blues Harp Player of the Year” award. He was awarded the Deford Bailey Harmonica Award by the Marion James Blues Society in 2009. A Google search can find numerous articles and facts about Shannon Williford.
A seven-year veteran of teaching English and speech & drama in secondary schools in South Louisiana, Williford also directed school theater and coached football. He holds an M.Ed. in reading education from Tennessee State University and a Bachelor’s degree in Speech/English from Belhaven College. He has done graduate work at Louisiana State University and undergrad work at the University of Southern Mississippi.
Williford was the owner and manager of two singing telegram businesses for 7 years in the 1980s, one in Baton Rouge, Louisiana; and one in Birmingham, Alabama.
Shannon Williford has extensive stage and screen performance credits, as well as production and direction background. He is an actor, singer, musician, writer, and fool.