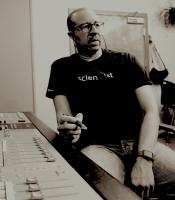 Caldwell Plus (Cedric & Victor Caldwell) signed to MCA Records Jazz label, Entitled“ As We Bop”—record was in the top 10 on Adult Contemporary charts

Played Bass Guitar, Drums, and Engineered on Whitney Houston’s Bodyguard Soundtrack, Jesus Loves Me (B side of I Will Always Love You)

Became the Director of A&R for Dexterity Sounds which is

Job Description:  Developing the Artist and managing the recording sessions, working with radio personalities, musicians, and public relations people.  Working with the Webmaster on maintaining the label website.

Bishop T.D. Jakes Movie “Jumping The Broom” in theaters May 2011

was released.  The CD soundtrack features 7 songs engineered and

Songwriter/Musician/Engineer/Producer of the debut CD by Ruby Camille “RC 1”.

Songwriter/Musician/Engineer/Vocalist/Producer of my on Solo CD

starting out on a musical instrument to making a career choice.

I have been called upon to speak at juvenile homes about

my life experience and encourage those who were incarcerated.

Grammy for Engineering-“Tribute, The Songs of Andrae Crouch

Dove for Producing “The Call” (Anointed)

Contemporary Gospel Album of the Year 1996

Grammy for Producing-“Alone In His Presence” (CeCe Winans)

Grammy for Producer/Engineer “Nothing Without You” (Smokie Norful)